Are You a Mean Dieter? 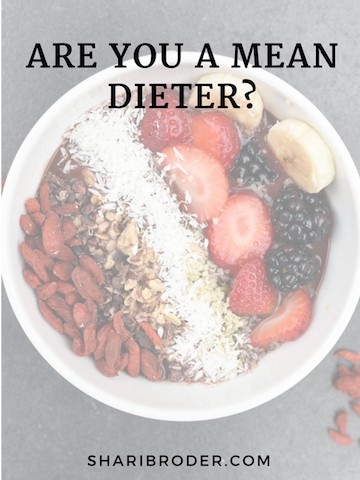 Are You A Mean Dieter?

We hear about mean drunks and happy drunks. I’ve never known any happy dieters, but have known many mean dieters. Thin mean dieters and overweight mean dieters. Both are mostly mean to themselves, but this leads them to be mean-spirited towards others, even though they aren’t otherwise mean people at all.  I know because I coach some of them!  Here’s what I mean.

No, they do precisely the opposite. They deprive their bodies and minds of the care they need and deserve with short-term solutions called “diets.”  It doesn’t matter whether it is paleo, low carb, intermittent fasting, Jenny Craig, (or how about the latest, the Viking Diet?) as long as it involves some strict mechanism that punishes them for gaining weight in the first place, and doesn’t allow them to eat like normal healthy weight people who love themselves. I mean, they don’t deserve to eat foods they love, right? They don’t deserve to be free from feeling hunger all day! This is their punishment for being overweight!

The thin mean dieter will often reach the weight she wants, losing five or ten pounds, and will try to use this to feel good about herself and compensate for her lack of self-esteem. She will be proud of her “willpower” that has allowed her to lose the weight she had gained.  She may continue to deprive herself of food for a while, but the result will always be eventual over-indulging, sometimes at weird times.  Like when visiting her friend’s house, she’ll stuff down four or five cookies before lunch because they are there and she hasn’t allowed herself sweets for months. Then, she will lose her appetite for lunch or just feel crappy from eating too much sugar.  She won’t even have enjoyed the cookies because she had to eat them fast enough to ignore the fact that she was eating them in the first place. This is mean.  It is body abuse. She thinks she doesn’t deserve to relax and enjoy a cookie.

Because the thin mean dieter has done nothing to address her poor self-esteem, she will also use her accomplishment to try to feel good about herself, often at the expense of others. Instead of loving herself for who she is, she has made being thin an important part of her identity, and thinks she can only love herself if she is thin. But she can’t.  She has gotten rid of some body fat, but her brain still thinks the same way it has for years.

She’ll probably try to feel better about herself by judging others who are fatter than she is. She’ll take the opportunity to point out other people’s weight problems (sometimes directly to them, like they don’t own a mirror or something, but usually behind their backs), and say things like, “She’s really let herself go” or “Did you see how much weight Jessie has gained?” What she means is, “Have you noticed how I am able to keep myself slim and Jessie can’t?” Of course, she still doesn’t like herself because the weight wasn’t the real cause of her low self-esteem.

Beat herself up, lose some weight, keep the same self-abusive attitudes about herself, gain the weight back, and beat herself up again.  Why are people so mean to themselves? There is no point to it!

Mean dieters can end this vicious cycle.  They can do that by addressing the cause of the problem, which is not their body, but their thinking.  Low self-esteem is something they learned, not something they were born with, and they can change it. They can start by making friends with themselves and learning to love themselves for who they are, not for what the number on the scale says or how their bodies look. They can learn to manage their thinking and stop saying mean things to themselves. They can work on their own or with a weight coach to learn to stop bullying themselves with diets and deprivation.  It never works in the long run anyway. They can think about what they love about themselves and their bodies, and treat themselves with kindness. Then, they won’t feel the need to overeat to cover up or compensate for their feelings of inadequacy.

Mean dieters, both large and small, can stop being mean and become naturally thin.  It is the only way they will figure out why they are overeating.  It is never too late to learn to love yourself and melt down to your naturally healthy weight.

EP. #107: Are You Choosing Between Losing Weight and Being Happy?