Don’t Believe Everything You Think! 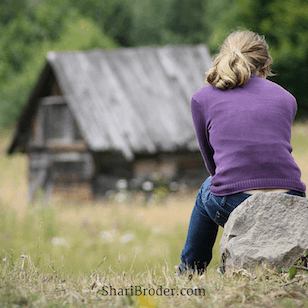 How do you think about yourself? Is your opinion of yourself based upon who you really are? Or on what your parents, friends or relatives told you as a child? Or the story you created from experiences decades ago that became your beliefs?

Because they do not examine their own thoughts, so many people allow themselves to be scarred for life based upon their interpretations of things they heard as children. These thoughts become their beliefs.  For example, when Sarah was nine years old, her younger brother died.  Around that time, Sarah overheard her father say, “the good one died.” Undoubtedly, this was a horrible thing for a child to hear, especially while grieving for her brother.  Yet Sarah believed that her parents thought she was “the bad one” and made that mean that they thought she should have died instead of her brother. This belief became Sarah’s story, even long after her father died (when Sarah was 25), and she used this belief as an excuse for her behavior her entire life. For decades, she allowed herself to suffer the pain of this belief, and expected everyone to understand that this was why she was selfish, depressed and sometimes verbally abusive.

Clarissa was the youngest in a large family.  As a child, some of her older siblings did not treat her kindly, and this led her to think that she was a burden to everyone.  This thought became her story. As she became an adult and had a family of her own, she continued to hold onto this belief.  She had very low self-esteem, and consequently suffered from depression for much of her life. Yet she didn’t question her thoughts or beliefs.

These situations are so unfortunate because we actually have a lot of control over how we think about ourselves.  In fact, we are the only ones who can control this! But if we keep thinking the same thoughts without questioning them, they become our beliefs, and those beliefs become who we are.  As a life coach, I work with people to help them examine their thoughts about all sorts of things, including their thoughts about themselves.  While it isn’t always easy, with coaching and perseverance, people can change their thinking and get out from under the self-created burden that’s holding them back.

Both Sarah and Clarissa believed the stories they created so much that they assumed their stories were facts. Because their thoughts create their feelings, their stories led them to have a low opinion of themselves, which contributed to their depression. (Although I am not a mental health professional, I have learned from many professional sources that low self-esteem and depression often go hand in hand.) Their thoughts served absolutely no purpose other than to make these two women very unhappy and insecure.

Who would Sarah and Clarissa be without these thoughts? Our thoughts are not reality, they are just thoughts. Clarissa didn’t really know whether people actually thought she was a burden, yet she chose to allow her siblings’ poor treatment of her to mean that she wasn’t worthy or okay, rather than that they were just being kids who can be cruel and thoughtless at times.  What other people think of us has a lot more to do with them than with us. But what if Clarissa had examined her thoughts? If she looked at the circumstances of her life from a purely factual perspective, she would see that there was no evidence that she was a nuisance at all.  In fact, she was quite the opposite. She was a devoted wife and mother loved by her family and friends. Loved by the very siblings who weren’t so nice to her decades earlier.  With the help of a life coach, someone like Clarissa could change how she thinks about herself.  Instead of being held back by low self-esteem and depression, she could see herself for all of her good qualities and remove the limitations placed on her life by thinking she wasn’t worthy.

The same is true for Sarah. With coaching, she could see herself as the smart, talented women she is, and put her brains and creativity to good use, rather than wasting so much of her energy trying to compensate for her feelings of inadequacy.

Are you holding onto painful thoughts and beliefs that hold you back? We aren’t limited to being the person we created in our stories.  We all have the power to change any thoughts that aren’t serving us, and to be anyone we want to be when we manage our thinking.