Fear Can Make You Boring 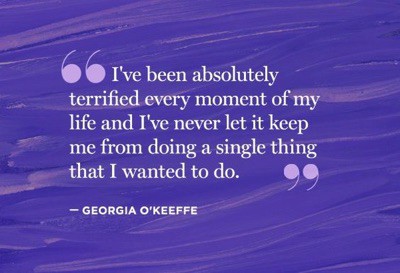 Have you ever pondered why some people are fascinating while others seem dreadfully boring? I have thought about this quite a bit. Whenever I have to spend time with someone who I find snoozy dull, I wonder, “what is it about this person that causes me to think he’s so boring?”

I didn’t want to believe that anyone was simply inherently boring. That just isn’t possible. So I considered whether it was a person’s choice of career or lack thereof. I thought perhaps people who didn’t work for a living had less to talk about. Then I remembered that my mother did very little paid work outside the home during her life, and while she may have had her faults, being boring wasn’t one of them. Plus there are many people who, for whatever reason, choose not to work for pay, but who spend many hours each week engaged in interesting pursuits. So that wasn’t it.

I also knew it had nothing to do with whether a person was outgoing or shy, introverted or extroverted. Nothing at all. Some of the most interesting people I know are introverts. Some extroverts I know blow a lot of dismal wind my way.

It also has nothing to do with whether you share common interests.

I tossed around many different theories in my head until one day I found my answer.  I had just started reading Elizabeth Gilbert’s new book, Big Magic, and there it was right on page 19.  “Fear is Boring.” She described fear as “a song with only one note—only one word, actually—and that word was “STOP!”

That was it! The one trait all people I found boring had in common was that they let their fears be the captain of their ship.  They listened to that “STOP!” a lot. They were basically too scared to really fully live their lives. Too scared to put themselves out there. Too scared to try anything new. These people all despised change, avoided it like the plague, and lived in fear of it. Fear of change pretty much means fear of life because life is change.

Liz Gilbert went on to wisely distinguish between fears we need and fears we don’t need. We need some fears for basic survival, like fear of dangerous animals or walking into traffic. Then there are all of those other fears that we don’t need.

This is where we have a choice. A choice that can lead to being a boring person or an interesting or even fascinating one. If you don’t mind being boring, then by all means let your fears hold you back. Let them keep you from leaving that job you hate, writing a song or poem, singing aloud with your friends, traveling to someplace new, cooking without a recipe, or even being yourself.  Letting your fears control the choices you make will prevent you from being all that you have the potential to be, which for each and every one of us is a fascinating individual.

Here’s the caveat, though. If you choose to let fear have the driver’s seat in your life, you will not lead a full life. So many things you might otherwise love that might give your life meaning will be left untried.  At some point, you may look back with lots of regrets.

The other choice is to recognize our fears, and do stuff anyway. Fear is just a feeling. A vibration in our bodies. It can only hurt us if we let it, which is exactly what we do when we give it the power to make our decisions for us.

Fear can be an uncomfortable emotion, no doubt about it. But if you “sit with it” a bit, and take a look at what is causing it, you’ll frequently notice that it isn’t so bad. It may even go away on its own. Being with our fears and overcoming them involves examining the thoughts that are creating our feelings.   It requires us to consider whether those thoughts are true, which they usually aren’t.  Often, they’re based upon beliefs we have held for years. Beliefs that we don’t even question, but that have no basis in reality.

As Liz Gilbert wrote, “if you can’t learn to travel comfortably alongside your fear, then you’ll never be able to go anywhere interesting or do anything interesting.” She’s absolutely right.

As a life coach, I help people examine the thoughts that are holding them back, and create a way of thinking that allows them to move past their fears and be the amazing person they were born to be.  If you want to give coaching a test drive,