How to Measure Your Progress 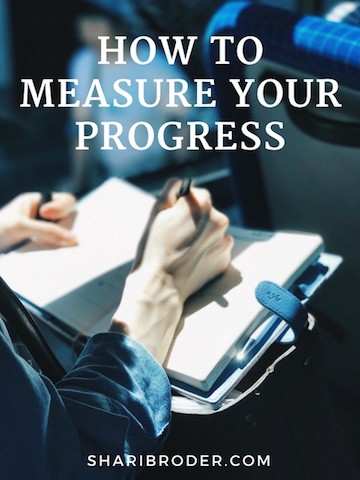 Measure your progress by how you are changing your habits, not by the number on the scale.

In my home and in my coaching practice, I talk about the idea that our negative patterns are either lines in water, lines in sand or lines in rock. If you draw a line in water, it goes away instantly. Lines in sand can be blown away by the wind or washed away easily by the tide. Lines in rock, however, take a lot longer to sand down.  They are our oldest conditioned habits that are the most difficult to break.

I named my coaching practice “conscious groove” because I like to distinguish between those things we do consciously and the unconscious lines we make in rock, which I think of as our personal ruts if they are things we do that do not serve us.

If you want to change a negative pattern or habit, you have to replace it with a positive one and practice the new behavior for a while to eliminate the old one. The longer you have the habit, the longer it takes to break it. When you hear that it takes three weeks to break a habit, that is not a hard and fast rule. It depends on how deeply ingrained your line is in the rock.  Every time you practice the new behavior, a neural connection is created in your brain. The more you practice, the stronger the connection gets and the faster it becomes automatic. You are slowly erasing the line in the rock. If you give in to your old habit, however, you are digging that rut deeper.

This is why I tell my weight coaching clients that they have to be patient in the process of changing old patterns that caused them to be overweight into new patterns that will allow them to melt down to their naturally healthy weight and stay there relatively effortlessly.

Let’s say you come home tired from work every day and “treat yourself” to a snack. You aren’t hungry, and would feel a lot better if you took 15 minutes to relax on the sofa and read a magazine, but for 20 years, you have wolfed down half a bag of potato chips at this time of day. Your brain, which is very efficient, knows that this is what you do, so you seem to not even think about it (although you really do), but walk in the door, drop your briefcase, and automatically open the cupboard and grab the chips.  Because you associate this with a reward for working hard, you feel comforted by this, even though you can barely taste the chips as you are stuffing them in your mouth while reading the mail.

My mindless emotional eating patterns were lines in rock. I learned to be aware of these patterns so I could spot when I was likely to fall back into one. For example, I knew that I had a tendency to snack mindlessly while I was trying to wind up my work at the end of the day. I told myself I was too busy to stop working and have a snack.  But when I decided I wanted to stop overeating for good, I knew what to look for.  When I found myself thinking, “C’mon, go get some of those Trader Joe’s lentil curls,” I would stop and consider whether I was actually hungry.  If the answer was no, I knew that food wasn’t what I needed. If the answer was yes, I told myself that I could have a snack as long as I sat at the table and ate it while doing nothing else. Sometimes, this helped me realize that I would rather be getting out that last email to a client than having a snack, so I wasn’t really very hungry after all. I practiced this for many months, and eventually that line in the rock wore away and I stopped getting those urges. There were times when I gave in to the old pattern, but did not beat myself up. I thought, “What can I do tomorrow so that this doesn’t happen again?”

You can replace your unhealthy eating habits with healthy ones, but it requires patience and persistence. There will be times when those lines in the rock tap us on the shoulder and say, “you’re stressed out! Eat some cookies!” And there will be times when we act unconsciously to grab the cookies. Whenever I am tempted to eat mindlessly for whatever lame excuse I might have, I think that if I give in to that, I will deepen the line in the rock, but if I don’t, I will make new positive neural connections in my brain. We need to recognize those old habits, then tell ourselves, “I don’t do that anymore.” Over time, the old patterns fade away. It will get easier and easier, and one day, you’ll realize, “I don’t feel like snacking mindlessly when I come home from work anymore!”

To get rid of excess weight and keep it off, you should focus on changing the habits that cause you to overeat.  Set a few goals of habits you want to change, and measure your success by how you are doing in reaching those goals. Instead of thinking, “I want to lose 10 pounds by my birthday,” think, “I want to stop eating chocolate while watching TV after dinner.” If you stop unconsciously eating the chocolate, the weight will slowly melt away.

EP. #115: Managing the Voice Inside Your Head

Previous Post Are You a Mean Dieter? Next Post Happy Mother’s Day to all Mothers and Daughters!