If You Want Security in Your Relationship, Trust Works Better Than Control 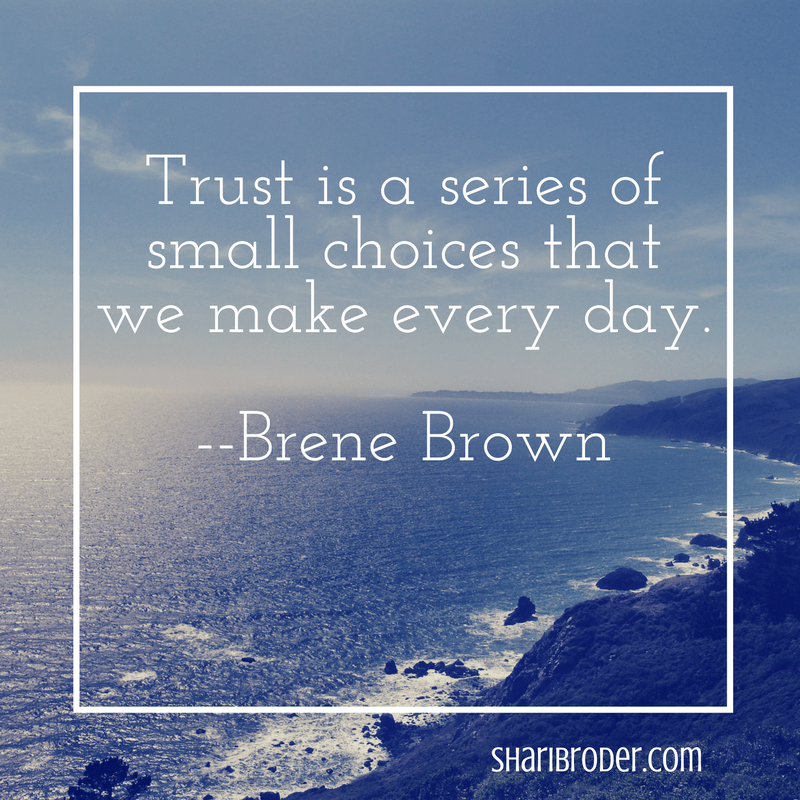 I was listening to a fascinating TED talk with Ricardo Semler*, and he said something that really resonated with me and got me thinking.  “The idea that having control generates security is a very silly idea.” Semler is being polite by using the word “silly.” How about foolish? Misguided? Ineffective? Unsustainable?

This is the reason I have never liked “top down” organizations. Excessive control and lack of autonomy lead to unhappiness and discontent.  Smart, talented people with any sense of self-worth will remove themselves from such situations as soon as they can.

Every relationship tends to have one partner who is more assertive than the other, and that works, as long as the both partners still retain a reasonable amount of autonomy. That isn’t what I’m talking about. Assertive doesn’t always equal controlling.  Some of the most controlling and manipulative people are quiet tyrants.

I’m sure you know some people who you think of as “control freaks.” Maybe you are one of them. Control freaks are people who try to dictate how you’re supposed to be and feel so that they can feel good. Control freaks not only write manuals for the people in their life to follow, they persistently try their best to obtain compliance with those manuals.

Lets call these folks by a nicer name. Controllers usually don’t see themselves as controlling. They just think they are right. Controllers are people who, regardless of our wants and desires, want everything to be their way. It is never give and take.

Controllers lack spontaneity. They live by a rigid, lengthy set of rules, and don’t like exceptions.  If you are in a relationship with one, she will tenaciously maneuver you into living by her rules, too.

Even if you aren’t in a relationship with a controller, I’m sure you know people who are. You can spot this because the controlled are chameleons in their relationships.  They change to be like their controller to make it work and to avoid the conflict of pushing back and advocating for their preferences. Controllers prefer conflict avoiders and often end up in relationships with them because a conflict avoider will stay in the relationship longer than other people. When a friend is in a relationship with a controller, you will know it because you will think, “Wow, she would never (do those things)(eat those foods)(wear those kind of clothes)(go to those places) before!” about a number of things. And she doesn’t seem any happier than before the relationship. In fact, she may exude resignation.

This gives the controller a false sense of security.  They think everything is neat and tidy and under their control. Underneath this uneven and shaky foundation, however, the controlled partner is building walls around her resentment and dislike of being controlled.  It is difficult to be happy over the long term in a relationship with a controller. It requires us to delegate too much of who we are to that person.

Real security is born out of trust. Trust is the bedrock of a strong, enduring love relationship. It is the opposite of control.  Control is something that one person takes from another.  Trust is something that we give another person because they have earned it.  Trust opens the door for us to be vulnerable, which opens us to real intimacy, belonging, love and joy.  You can’t experience any of those things when you are the controller or the controlled.

*Semler created a very successful company in Brazil using what could best be called “corporate democracy,” allowing employees to design their own jobs, select their supervisors, and define their pay.

EP. #115: Managing the Voice Inside Your Head

EP. #110: 5 Steps to Transform Your Relationship with Food (or anything else!)

Previous Post Think You Can’t Change? Think Again! Next Post We Become Old When We Stop Having Goals