Love Being the Peach 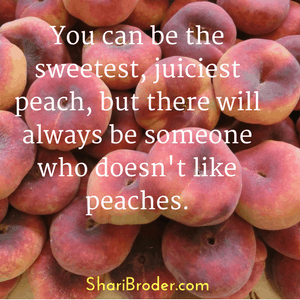 I love that quote circulating the Internet that says something like “you can be the sweetest, juiciest peach in the world, but there will always be someone who doesn’t like peaches.” I think I’ve told this quote to almost everyone I’ve coached!

Think about how often you worry about what other people think of you. If you never worry about this, you can stop reading this post and read a different one. Most of us, however, spend too much time either worrying about or trying to control other people’s opinions of us.

This is really a waste of time. We can’t control how other people think no matter how hard we try. We can’t even be sure what others are thinking about us unless they tell us. Even then, they might not be truthful.

When we try to act a certain way so people will like us, we are pretending to be someone else.  If we succeed, what have we accomplished? Someone likes you for being someone you aren’t. What an accomplishment!

It is all about how we THINK about other people’s opinions. The peach quote above says it all.  It isn’t about you. You’re the peach, but you aren’t going to make someone who doesn’t like peaches like you. That’s okay.  You don’t like everyone either. We can’t like everyone.  So of course, everyone isn’t going to like us.

Everyone you meet will have a different opinion of you based on all kinds of things, but those things really are about the other person, and not you. Let’s say someone acts really cool towards you, and you think, “What have I ever done to him or her?” Instead of analyzing the situation, let it go. Maybe she doesn’t like you because you’re outgoing and friendly, and she’s shy and feels threatened by outgoing people. Maybe you remind her of the woman with whom her husband had an affair.  Maybe you’ll get to know her better and she will see you for who you are. Maybe she’ll like you, and maybe she won’t, but it is up to her.  It is what is going on inside her head.

See what a small deal that is? It is all about what we make people’s opinions mean. Her opinion doesn’t mean there is anything wrong with you. It doesn’t mean you’re unlikeable. It just has to do with whether she likes peaches. Don’t let her opinion define who you are. Most importantly, don’t let it affect whether you like yourself!

There will be people in your life who you have to see on a regular basis who won’t like you. A coworker in your job perhaps. How about your mother-in-law? Your mother-in-law may have wanted her son to marry someone like Queen Elizabeth, and you’re like Lady Gaga. The important thing is simply to recognize that peaches aren’t her fruit of choice, and to leave it at that. It doesn’t mean there is anything wrong with you, or that you aren’t a good wife.

Speaking of choices, the only choice we really have, day after day, is to show up as ourselves, pure and unadulterated. The people you love and care about will love you, too. Hopefully, the person whose opinion of you matters most also loves you.  That’s you!