When You Enjoy the Process, You’ll Reach Your Goal 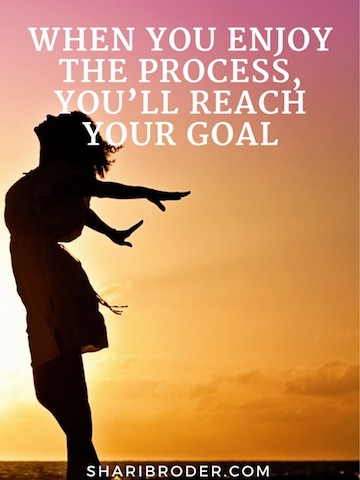 Why do diets fail for 97% of people who attempt to lose weight? There are many reasons, but one is that the focus is on the end goal, and not the process of getting there. If you really want to lose weight and keep it off, the process is far more important than the goal.

Let’s say you decide you want to lose 50 pounds. That is your goal. So you go on a “diet,” meaning you temporarily eat in a very structured way until you reach that goal.

When people start a diet with a specific number in mind, they become fixated on that goal. To reach it, they deprive themselves of foods they love. Maybe they go so far as to join one of those programs where you have to buy their packaged foods. I’ve been at dinners with people who have brought their little packages of sautéed mushrooms, beef tips, and steamed carrots to dinner, and poured this food that was cooked who knows where and who knows when onto their plates. Dieters are attracted to these rigid diets because they can’t trust themselves to make decisions about food or to control their own behavior, so they like when someone else tells them what to eat.

Rarely do dieters stay on diets long enough to reach their elusive goal. If they do, they are then ill equipped to keep the weight off because they have no skills for eating like a slim person. They still can’t trust themselves around real food in real life situations. They either “go off” the diet and eat the way they did before, which gives them the same results they got before—overeating which leads to weight gain—or they white-knuckle it, relying upon continued deprivation and willpower which cannot be sustained over the long term. So they gain the weight back either way.

When I work with clients, I don’t even ask them how much weight they want to lose. I focus on the process of learning to eat like someone who isn’t controlled by food. Have you ever noticed how your naturally thin (not diet thin) friends go to parties and eat whatever they want? For most of them, it isn’t luck or a good metabolism.  They just don’t overeat!

To lose weight and keep it off, you need to learn the skills to live a life in which you go to parties, you eat your coworker’s birthday cake, you eat in restaurants and go on vacations.

You need to know how to be in touch with your body’s hunger and fullness signals, and eat in response to your body’s needs. You need to notice the thoughts that tell you to eat when you aren’t hungry, and learn how to manage them.

We only have so much willpower and need it for a variety of things. We can’t spend it all on avoiding eating the foods we love. And we don’t have to. We can enjoy the things we love, and still feel light and energetic . . . and lose weight!

From the very beginning, I teach my clients the process of learning to eat like a naturally slim person. It takes a lot of practice to change years of bad eating habits, but that is the only way to lose weight and keep it off.

If your habit was to eat as a way of dealing with unpleasant emotions like boredom or loneliness, you must learn how to address those emotions without masking them with food.  Why not start practicing that from the very beginning? When you focus on the process, the goal takes care of itself.

If you practice eating only when you’re hungry, you’ll eventually lose the desire to eat in response to your emotions or because your coworker brought in birthday cake.  You may easily pass up that mediocre supermarket cake for an afternoon snack of some gelato you love. Soon, you turn that conscious activity of checking in with your hunger and noticing the thoughts that caused you to overeat into an unconscious behavior. It eventually becomes easy. No willpower necessary. You’ll create new grooves in your brain from continued repetition of this process. That is how we change our habits. And it can be fun and interesting . . .

If you decide to eat only when you are hungry, you will eat less and your weight will drop.  You can celebrate the victory of a day during which you only eat when you are hungry, and experience success from the first day, even if it takes a week or longer for the scale to reflect your efforts.

Would you like to learn how to stop emotional eating? You can get it by signing up HERE.

EP. #128: Who You Are is Much More Important Than What Your Body Looks Like

EP. #123: Detox Your Mind of Thoughts That Weigh You Down